Containing a synergistic collection of nutrients and herbs, Advantrim® helps the body to do what nature intended: maintain its natural state of health. The difference is that now it can be done in a way that also helps the body to burn the calories at a pace that supports long-term weight management.

How Can Advantrim® Benefit Your Health:

Containing a blend of natural ingredients including extracts of citrus fruit (C. aurantium), cocoa and green tea, Advantrim® may help increase metabolic rates, suppress appetite and promote lean muscle growth. And because Advantrim® contains a potent amount of antioxidants, it can help protect your body from environmental and systemic pollutants.

Boost Immunity: ADVANTRIM® provides a blend of powerful antioxidants including polyphenols and flavanols to help prevent free radical damage in the body, and boost immunity.

Advantrim® contains an extract of a citrus fruit (C. aurantium) containing a family of indirect-acting adrenergic amines (B-sympathicomimetics) that facilitate utilisation of energy substrates, stimulate metabolic processes, favor uptake of amino acids into muscle, increase lipolysis (breakdown of fat) and can exert mild hunger-suppressant effects. It is the only patented thermogenic ingredient for weight loss and physical performance on the market today.

Advantrim®  is a synergistic collection of nutrients and herbs that helps the body to naturally do what nature intended to maintain health. The difference is that now it can be done in a way which will help the body to burn the calories at a pace that will help to maintain long term health, and keep the pounds off!

Advantrim®  also contains a powerful green tea extract that has been shown in clinical studies conducted by Dr. Abdul dulloo of the university of Geneva in Switzerland to raise metabolic rates and speed up fat oxidation. Not only does green tea have the advantage of helping the body to burn fat, it is also an excellent antioxidant. So not only will you loose weight, you will also be protecting your body from the environmental and systemic pollutants it is exposed to on a daily basis!

Another important component in Advantrim®  is cocoa extract which gently acts to motivate your system to use fatty acids as a source of energy. This component is provided in the form of a cocoa extract and a South American herb called yerba mate. These herbs also contain other phytochemicals that act to assist in the weight loss process. And as an added bonus, research shows that moderate amounts of caffeine can also help to improve alertness, concentration and memory.

Advantrim®  contains a revolutionary fat burning compound that is an extract of citrus aurantium. This extract contains alkaloids which are related to ephedrine alkaloids and have similar effects on metabolism and breakdown of fat without the negative side effects of ephedrine. They increase the metabolic rate, and also increase the rate of breakdown of stored fat (lipolysis) in the body.

Studies have shown that the extracts contained in Advantrim®  may be as effective as ma huang (ephedra or ephedrine), but without the side effects and potential negative side effects to the cardio-vascular and central nervous systems. 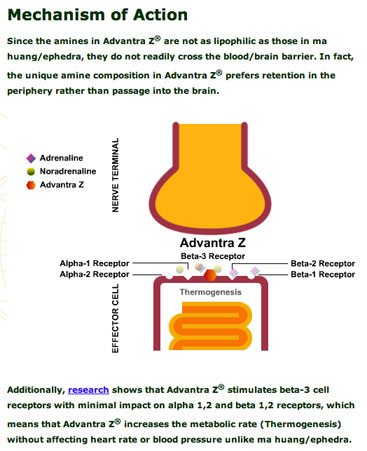 The key to this extracts success is its capacity to stimulate beta-3 cell receptors with very little impact on alpha-1, alpha-2, beta-1, and beta-2 receptors. This means that it functions to increase the metabolic rate without affecting heart rate or blood pressure. The unique composition of adrenergic amines encourages the release of adrenaline and noradrenaline. This occurs most likely in the area of beta-3 receptor sites found mainly in adipose tissue and the liver. Stimulation of these beta-3 receptors promotes the breakdown of fat. At the same time, this stimulation causes an increase in the metabolic rate (thermogenesis) that burns calories.

While foods and medicinal herbs derived from citrus species have been used, and continue to be used, for a variety of food purposes and for their health benefits, they have not previously been identified as herbs or plants which have value in the treatment of weight problems or for improving physical performance and fitness. In part, this is due to the fact that levels of the active agents in most citrus products are low; highest levels are found in parts of the plants that are not normally eaten, or in immature plants.

For example, levels of these agents in orange juice are expressed in parts per million, or even parts per billion. In practical terms, that means drinking 40 or more pints of orange juice per day, or eating 80 oranges, to get the intake of the active agents that would be obtained from one or two capsules in Advantrim® .

The main adrenergic amines (alkaloids) of the citrus extract, are synephrine and n-methyltyramine, which act almost wholly indirectly. In classical tests, these citrus alkaloids show properties similar to ephedrine, with activation of of ß-receptors . More recently, studies have shown that both octopamine and synephrine appear particularly effective in stimulating lipolysis (fat loss), a postulated ß3-receptor effect. It had been previously revealed that synephrine was about 3.5 times as effective in stimulating lipolysis as octopamine. There are thus indications that the alkaloid mixture in Advantrim®  is superior to the mixture of ephedrine alkaloids in ma-huang (ephedra sinica) in terms of effects on ß-receptors in general.

However, this theoretical superiority does not extend to the field of side effects. Initial studies in lean volunteers and obese volunteers, while showing excellent thermogenic responses (fat burning), failed to reveal any evidence of increased heart rate, blood pressure or central nervous system stimulation. A clinical study demonstrated excellent effects on weight loss with a total absence of side effects.

Thus though the citrus alkaloids appear to be at least as thermogenic as the ephedrine alkaloids, they are clearly gentler than the latter and do not cause the minor side effects associated with use of ma-huang (nervousness, agitation, palpitations, increases in blood pressure). The better tolerance of the citrus alkaloids is thought to be because they do not pass so readily into the brain, and may target fat cells rather more specifically.

Since there is increased availability of substrates (the free fatty acids which are released from the fat stores) for oxidation, the body has access to greater amounts of energy. The body's use of these substrates spares protein that might otherwise be oxidised for energy. Used conjointly with a high protein intake and an exercise program, this can result in increased availability of amino acids for incorporation into protein in the muscle mass.

With Advantrim®  you do not have the reported problems occurring that have been associated with ephedra such as elevated blood pressure, muscle disturbances, insomnia, dry mouth, heart palpitations, and nervousness.

Other Ingredients: HPMC (vegetable capsule), magnesium stearate, silicon dioxide.
DIRECTIONS
Take two (2) capsules before breakfast or morning exercise session, and two (2) capsules at mid-afternoon, with 240ml of water. Begin use with one-half the recommended dose (one capsule twice a day) for the first seven days to assess your tolerance. Do not exceed 4 capsules per day. Do not take in the evening. Please note: this product contains caffeine and should not be taken by individuals wishing to eliminate these ingredients from their diet.
Free shipping with $100+ orders.